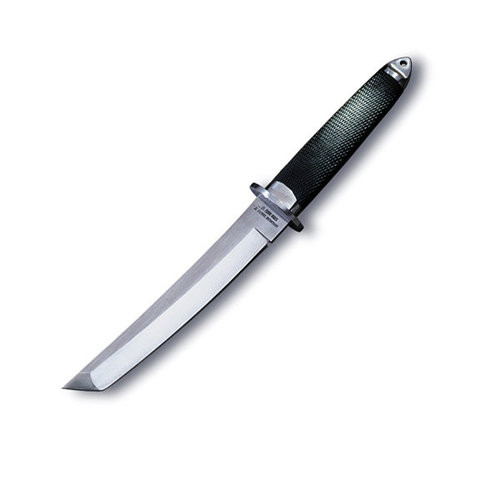 There isn't a person working in the knife industry today that knows more about the Tanto than Cold Steel does. It was, after all, Cold Steel who invented and popularized this knife style in the early 1980's. We have spent well over a million dollars persuading the public, both through advertising and live or videotaped demonstrations, of the Tanto's many advantages. We have been producing Tanto's for more than 25 years now, and there is still no factory or custom knife maker around making a Tanto that can approach the cutting, slashing or piercing power of one that is manufactured by Cold Steel.

All of our Tantos feature a deep lustrous satin finish on the hollow ground blade bevels and a contrasting line grain finish on the blade flats. This technique highlights our state of the art grinding methods and emphasizes the Cold Steel Tanto's unique appearance. In addition, the Tantos come with our famous flattened oval Kray-Ex™ handle. The oval shape provides a solid grip and resists rolling or twisting in the hand under hard use, the kind that, over time, would destroy a lesser knife. The use of Kray-Ex™ in knife handles is another Cold Steel innovation. Kray-Ex™ is an unparalleled space age material that won’t crack or rot and is immune to the ravages of bad weather.

The tapered, solid steel pommel is another important Tanto feature that should not be ignored. Lynn Thompson designed it to concentrate the full force of a crushing blow in a small area so that even a moderately powerful blow can be remarkably effective in disarming or otherwise incapacitating an attacker.

The knives in the Tanto Series all come with a thick, high quality black leather sheath that is sure to give years of hard service and keep your Tanto at your side, ready for action.

Tanto II (13MBII): Just two ounces heavier than the Tanto, the Magnum Tanto II provides a full 30% increase in cutting power. Combine that with the visual impact of a tsuba-style (sword) guard and you have perhaps the ideal Tanto. The Magnum Tanto II features a blade made from VG-1 San Mai III® blade.

Tanto IX (13MBIX) & Magnum Tanto XII (13MBXII): These were created in response to popular demand for a longer Tanto. They are available in nine inch and twelve inch blade lengths in our exclusive VG-1 San Mai III® blade.

What is San Mai III® blade? A simple way to think of San Mai III® blade is to imagine a sandwich: The meat center is hard, high carbon steel and the pieces of bread on either side are the lower-carbon, tough side panels. The edge of the blade should be hard to maximize edge holding ability, but if the entire blade was hard it could be damaged during the rigors of battle. For ultimate toughness the body of the blade must be able to withstand impact and lateral stresses. Toughness is generally associated with "softness" and "flexibility" in steel, so that, surprisingly, if a blade is made "tough" the edge won't be hard enough to offer superior edge holding. San Mai III® blade construction provides a blade with hard (higher carbon) steel in the middle for a keen, long lasting edge and tougher (lower-carbon) steel along the sides for flexibility.